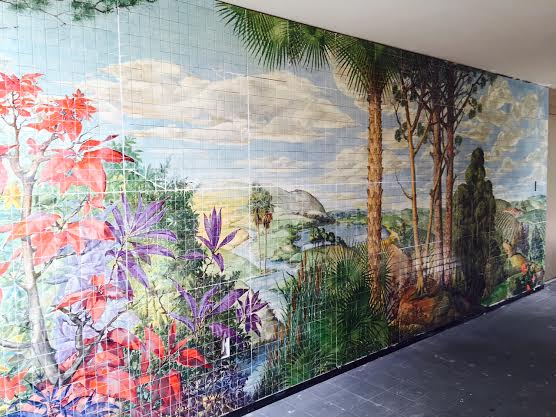 The City of Casselberry unveiled the Andres Bank Mural at the El Sentinel Latin Jazz & Art Festival on Sept. 26. Recently restored, the tiled mural, over 20 foot long, was discovered behind the walls of the old Wachovia Building (formerly known as South Seminole Bank) prior to being demolished in 2013 to make way for the US 17-92 Flyover. Back in the day, the mural was the showcase of the building and a favorite of bank clients and school children that were frequently given tours that highlighted the mural. The panoramic landscape scene from Florida that includes rolling hills, citrus groves was created by Antonio Martinez Andres.

Artist Antonio Martinez Andres (b1917 - d1966) was born in Madrid, Spain. Winner of Spain's Count of Cartegena Fellowship and medal winner for the National Exhibition at the Museum of Modern Art in Madrid, he traveled and lived in Cuba from 1947 to 1961 and left at the beginning of Castro's regime. He has painted murals for many of the finest churches and painted portraits of famous personages of Cuba and Spain including the bull fighter Manolete. When he left Cuba, he moved to St. Petersburg and continued to create large-scale murals prominent churches and businesses.

History of the Mural

Wachovia Building (formerly known as South Seminole Bank) opened in the late 1950's as the only bank in Seminole County outside of Sanford and the only financial institution from Winter Park to Sanford along the old 17-92 corridor. It became the first "all electric" building in the county and was annexed into the city of Casselberry where it served as the designated "fall-out" shelter during the Cuban missile crisis. Artist Antonio Martinez Andres was commissioned to create a large-scale tiled mural on the walls behind the tellers. During remodeling in 1994, the mural was hidden behind a wall where it remained forgotten until 2000.

For almost 20 years, the mural remained hidden behind the wall, forgotten except by one man, former bank president, David Powers. After hearing that the old bank was on schedule to be demolished in 2013 as part of the US 17-92 flyover project, he contacted former Seminole County Commissioner Larry Furlong to let him know about the beautiful mural hiding behind one of the walls. He mentioned that someone should try to locate it and save it if possible because of its historical significance and its artistic beauty. Furlong contacted the City to see if there was a chance that the mural could be located. A few weeks later, a group of officials from FDOT, along with City staff and David Powers entered the dark, abandoned building with flashlights in search of the mural and after many holes in the wall were made, the mural was discovered.

The City worked with an outside contractor to carefully extract the large tiled mural consisting of thousands of quarterly scored 4x4 inch hand- painted tiles. The local artist community banded together for this labor of love and several key artists were consulted to help come up with a plan on how to remove the mural from the wall. This group included mosaic artists, Suzi Edwards and Rich Rudden and Bonnie Mc Namara, owner of Pruet Conservation Studio. Before removal, each tile was numbered, photographed and catalogued. After several months and a plan in place, the mural was carefully removed in sections from the old bank building and placed in a secure storage facility near Casselberry City Hall.

One of the artists selected for the restoration work was Ulysses Mora. For almost 2 years, he painstakingly restored the mural to its former glory. He is comfortable with the process meticulously restoring works of art and has worked on several historical projects in St. Augustine. Originally from Mexico, Mora, a past member of Orange County's Public Art Review Board, started his studies at Emerald Academy of Mexico City, and continued at San Carlos INBA, UNAM University National Autonomy of Mexico, obtained a BFA and continued studying restoration, maintenance and conservation of artwork.

After artist Ulysses Mora completed the finishing touches on the restored mural, it was reinstalled at its new location in a breezeway at Casselberry City Hall. Truly a labor of love, the City is thankful to have so many artists from the community come together to help preserve the artwork of a fellow artist for many future generations to enjoy.

At the official dedication and sponsor recognition ceremony during the Founders Day/Sculpture Competition on October 10, local dignitaries, sponsors, artists and the relatives of Antonio Martinez Andres were invited to be a part of the ceremony.